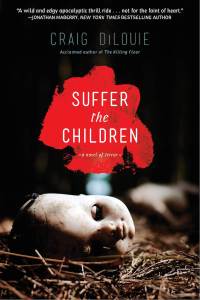 In his latest horror novel, Suffer the Children, Craig DiLouie’s apocalyptic vision is an interesting departure from the typical end-of-the world scenario. Although DiLouie has become known for his zombie apocalypse fiction, a sub-genre of horror that he excels at, in this chilling narrative he shines a light on some of our most common fears with a different kind of monster. Like Richard Matheson in his classic science fiction horror novel, I Am Legend, DiLouie depicts an alternative to the tropes of vampirism and provides new nightmarish what-if questions that ask the reader to contemplate just how far they would go to save their loved ones.

Herod Syndrome is a quick-spreading illness that appears without warning and wipes out the entire population of pre-teen children around the globe in roughly 48-hours. Scary, right? But wait. It gets better. Not only do all the children in world die, which causes a near collapse of infrastructure due to the sheer volume of corpses, but three days later they are resurrected and climb out of their mass graves. Some have to be helped out of their body bags. Some wake up on autopsy tables. Parents who aren’t completely horrified by their children rising from the dead see this unexplained and supernatural event as a miracle and possibly proof of God.

As a fan of horror and a self-proclaimed heathen, let’s just say I was skeptical that this story would have a happy ending. As the parent of a young child, I sympathized with the main characters and had to ask myself if I would be willing to go to the lengths they went to in order to keep their children “alive.” It didn’t take me long to come to the conclusion that people returning from the grave, loved ones or not, is never a good thing. Children or not, prolonging the “life” of the undead is only going to lead to more problems down the road. Not only do the children return from the grave and maintain the appearance of corpses, but they also behave in a zombie-like way, awake but non-responsive to most outside stimuli. They seem to sleepwalk until they completely stop moving and appear to be dead once again. If that isn’t unsettling enough, when the children wake up, they ask for blood. I say ask for blood, but demand is more accurate. In some cases, they scream for it.

What would you do if your child awoke from a death-like sleep and asked for blood?

You might be surprised by what some of DiLouie’s characters do to keep their families together, or maybe not. How many times have you heard a parent say they would do anything for their kids? Human behavior can be scary, and although the children return from the grave with vampiric appetites, the real monsters in this apocalyptic tale of biblical proportion are the parents who try to keep their children fed no matter what the cost to their fellow human beings or themselves. Normal church-going, tax-paying, upright citizens resort to unspeakable acts to acquire blood for their children, and to ease their consciences, as most people are wont to do, they adopt ridiculous euphemisms to trick themselves into believing that what they’re doing is less horrific. Blood is called medicine, because it revives the children and gives them the appearance of being alive and well. But each time the children drink blood; they become a little less themselves, deteriorating into mindless monsters driven only by their unsavory cravings. If that’s not enough for you, when the blood supply begins to get scarce, people turn on each other in order to maintain the illusion of family and order while society collapses around them and their adult neighbors begin to disappear.

DiLouie questions the very fabric of our society. When all hell breaks loose and no answers come from the government, local hospitals, paramedics, even the police act more like street gangs as they kidnap people and harvest their blood. Could we rely on our friends, our neighbors, our spouses, the police to keep us safe when the world is crumbling around us? Would you be strong enough to go against the mainstream and let your children die rather than allow them to become blood-sucking fiends?

Pick up a copy of Suffer the Children, now available from Gallery Books, an imprint of Simon and Schuster, and find out just how far you would go to save your little ones.

3 thoughts on “Book Review: Suffer the Children, by Craig DiLouie”