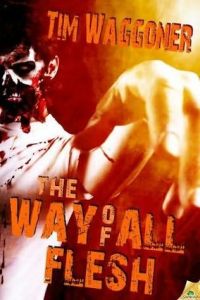 “Dear Christ, was the thought of eating children actually making him hungry, too? What kind of monster had he become?” (Waggoner 129)

What kind of monster indeed. Tim Waggoner’s apocalyptic horror novel, THE WAY OF ALL FLESH (2014), is a multiple POV tale that puts the reader inside the minds of some very disturbed and disturbing characters. One of which is a zombie. This is not the first novel featuring a zombie protagonist, but these stories are still few and far between, especially when you’re talking about a zombie in the midst of an existential crisis who may or may not be mankind’s next messiah.

Calling David Croft a zombie is a bit too simplistic. This complex monster has a lot more on his mind than consuming human flesh. He hungers for answers to what went wrong in his world to transform the familiar comforts of modern urban life into an unrecognizable dystopian nightmare. Demons hunt him, buildings are in ruin and have taken on the unmistakable appearance of human innards, and his fellow humans have developed a taste for flesh that rivals Hannibal Lecter’s.

David is on a quest to find his family and reestablish some normalcy in his world. Wait, isn’t that what zombie apocalypse survivors usually do? Waggoner subverts the genre and asks us to put ourselves in the place of the zombies. Technically, aren’t they survivors too? An altered humanity that had no say in what happened to them after being infected by Blacktide.

The novel opens with David waking up, or regaining consciousness without any solid memory of how he got there. He finds himself in a reality so distorted and terrifying that you might initially think he’s landed in an alien landscape far from Earth. Time, space, and perception are at odds with his fleeting memories of the recent past. We gain a keen sense of David’s confusion and repulsion as he sleepwalks through an Ohio city in the grips of urban decay synonymous with Hieronymus Bosch’s paintings of Hell. Waggoner’s full-sensory descriptions of life after near-human extinction inspire much facial cringing and utterances of “eww.”

Here’s a small taste of the horror buffet Waggoner paints with words:

Black liquid coated large chunks of something that David couldn’t identify. At first he thought they might be pieces of his body, that he had literally puked his guts out. And that black shit! What the hell was that? Some kind of poison? Maybe cancer? Is that what he’d done, thrown up a bunch of tumors? Was something like that even possible? (72)

David’s brain isn’t functioning properly. It could be a side effect of the disease that has made him undead, but we don’t really know. The brain does deteriorate as we approach death, with areas slowly shutting down and sometimes causing hallucinations. How would zombies see the world?

We don’t realize how badly David’s perception is altered until we meet some of the other characters in the novel. Kate, Nicolas, Marie and their fellow human survivors seem to have a better grasp of reality and provide at least a temporary sense of grounding for the reader since we can more easily identify with humans trying to survive a zombie apocalypse than we can with the undead. Right? If you survived a world-altering event that meant mass extinction for the human race, you’d probably be hell-bent on surviving by any means necessary. Killing zombies would be your raison d’etre if you managed to avoid being claimed by Blacktide. Isn’t that what we’ve come to expect from most zombie fiction? Humans vs. zombies.

But what if Blacktide doesn’t equal extinction for humans? What if it is transformation? Evolution? What if becoming a zombie is just the next logical phase for humans? An evolutionary inevitability.

Waggoner’s zombie tale calls into question our understanding of consciousness, perception, and reality in terms of who really survives or has the right to survival after the apocalypse. Should humanity take a backseat and allow the monsters to flourish and rule the world? Is there a way for zombies and humans to live harmoniously without the need for violence?

This novel doesn’t skimp on violence. There’s plenty of gun-toting, head-bashing, and vagina-munching good times. Gore, ichor, and a whole lot more. Make no mistake, THE WAY OF ALL FLESH is a horror novel. But it’s a horror novel that asks the reader to think a little deeper about the concepts that define humanity and life itself. Waggoner’s novel packs a philosophical punch and provides a read you can really sink your teeth into.

One thought on “Book Review: The Way of All Flesh, by Tim Waggoner”