If you’re anything like me (a slut), lusting after one character in a fictional universe just isn’t enough. This is especially true if those characters are well-developed, have strong voices, plenty of conflict, and interesting plots to follow. Fighting monsters is a bonus. It also doesn’t hurt if gorgeous actors with fun personalities inhabit those roles.

One show that seems to have everything I’m looking for in a serialized speculative fiction story that delves deep into Horror and Fantasy, with occasional monster-of-the-week episodes, is Supernatural. The show is currently in its eleventh season and has a seriously devoted fan-base. If you’ve been living under a rock and have never watched Supernatural, do yourself a favor, and catch up NOW! Seasons 1 – 10 are available on Netflix. And, my online stalking…I mean research…predicts a release date for season 11 in October 2016.

Unless you’re performing surgery or curing cancer, get up, make an excuse, head home, put on pajamas, fix a snack, have a box of tissues handy (for crying or for whatever other use you have for tissues), and binge-watch season 1. If you aren’t hooked by the end of the first season, you may be dead already. Or hate fiction. Or interesting characters. Or fun.

I could watch every single episode over and over. And, I have. But the meta-fictional episodes are always my favorites, with the episodes that deal with urban legends in a close second place, and after those, the season finales when you are guaranteed to hear Carry On My Wayward Son, and shit gets real.

While putting together my list of fuckable fictional characters, I initially planned on giving separate posts to both Sam and Dean Winchester. Then I started thinking about their dad, John. And Crowley. And Balthazar. And Castiel…and…well, you get the idea. I would very much like to devote an entire post to Crowley, because who wouldn’t want to go on a date with the King of Hell? Unless, of course, you hate fun. Or fear demons. Or whatever.

So many flavors, and none of them vanilla.

ANYWAY, the Winchesters are each appealing in their own way. I mean aside from being well-developed characters you can really empathize with; they are each uniquely handsome, interesting, emotionally damaged, and yet somehow extremely funny. So, why just pick one when you can fantasize about all three?

Without giving away too many spoilers to people who have been living under a rock, Dean Winchester is the older (and hotter) brother in a family of Hunters. In this fictional universe, Hunters hunt all things supernatural – demons, vampires, werewolves, sirens, rogue angels, gods and goddesses, and even the Wicked Witch of the West…or East…South? Whatever. You get the picture. Dean and his brother, Sam, lost their mom at the hands of a demon when they were young, and were raised by their dad, John, to become Hunters. The death of Mary Winchester changed their lives forever, and put them on the road to Destiny.

Dean is ruggedly handsome, physically strong, an expert at recognizing bullshit (except for his dad’s), loyal to a fault, and sexually promiscuous and adventurous. Dean likes the ladies. So many ladies. He’s a weapons expert, street-savvy, well-versed in the popular culture of his youth, protective of family and close friends, and suspicious of anybody who isn’t human. He can be incredibly sentimental and romantic when given the chance, and he will fight to the death to save his brother, and maybe the rest of humanity. He has a perverse sense of humor and is a connoisseur of pornography, Looney Tunes, Classic Rock, and muscle cars. He could probably benefit from some therapy to deal with his anger issues and fear of abandonment.

Rather than talking things out, Dean likes to solve problems with his fists. Or a shotgun. He spends a lot of time drinking, fighting, and on a good day, fucking. He believes that being a Hunter is the only life he’ll ever know. Life on the road is rough, but he seems to enjoy traveling back and forth across the United States, hanging out in roadhouses, and eating in diners. He lives on cheeseburgers and pie, but would happily sit down and enjoy a family-style meal at the house of a friend. Unfortunately, aside from Sam and a few other important people in Dean’s life – it’s a short list – he doesn’t have many friends. 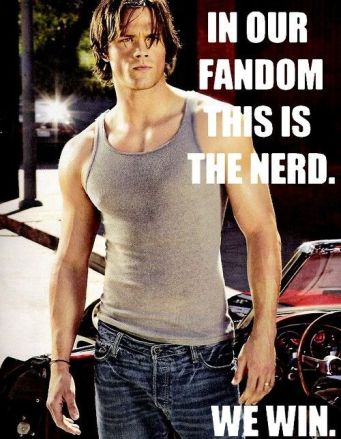 In the first episode we learn that Sam Winchester, Dean’s younger brother, has decided to quit the family business and go to college. He has aspirations of becoming a lawyer, getting married, having kids, and living a normal life. A life he never had growing up, because being the child of a Hunter means moving from place to place, having a spotty attendance record at school, and never really making lasting relationships with people outside their community of Hunters. Sam’s very book smart, and he often figures out what monster they’re chasing each week and how to kill it. He does a lot of research using old books, their dad’s journal which holds a lot of valuable information about supernatural beings, and the Internet. Sam spends a lot of time hanging out in libraries and coffee shops. Dean constantly teases him about being a nerd, but Sam’s still a kick-ass Hunter even though he keeps denying his true calling.

Sam is also smoking hot, but in an adorable, shy, nerdy way that makes you want to talk about books, movies, and mythology with him for hours before you seduce him and rip off his clothes. He isn’t afraid to show his emotions or be the voice of reason. Despite all the tragedy, pain, and suffering he experiences from dysfunctional family dynamics, the grief of losing friends and loved ones, and dealing with the shame and guilt he feels for killing monsters with human faces, he never seems to lose hope. He still dreams of becoming something other than a Hunter. He wants a better life for himself and Dean.

Sam and I share a phobia in common: Coulrophobia. There are several episodes where he has to confront clowns, including one of my favorites where they have to hunt and kill a Rakshasa, which is both hilarious and terrifying. Okay, mostly terrifying. I go through phases where I’m more into Sam than Dean, but honestly I adore them both. A few days ago I saw a T-shirt that read: “I’m a Dean Girl, but Sam Curious.” And I was like, “That’s totally me!” Of course, a more appropriate T-shirt for me would say something about an empty bottle of bourbon, a cheap motel room, and figuring out how all three of us are going to fit on the bed. 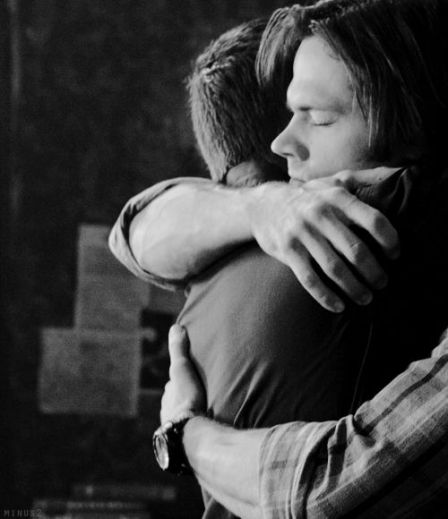 Sam and Dean’s father, John Winchester, was a normal working class guy, who was happy raising a family, coaching little league, and being married to the love of his life, Mary. But Mary had a secret past, and one night that past came knocking. Their happy family is shattered in a matter of moments when a demon invades their home and kills Mary in one of the most spectacular death scenes ever. Seriously, it is horrifically beautiful. The manner in which she dies causes the house to catch fire, and John hands infant Sam to 4-year-old Dean and says, “Take your brother outside as fast as you can! Don’t look back! Now, Dean, go!” From that moment on, Dean became Sam’s guardian.

In the first episode, Dean tracks down Sam at college, because their father is missing. John isn’t exactly missing. He doesn’t want to be found. Now that Sam is in college, Dean fears that he’ll be left alone if anything bad happens to John. Dean’s fear of abandonment is justified. Sam doesn’t take it very seriously, because John has a habit of taking off for long periods of time while Sam and Dean are expected to fend for themselves. In fact, in Sam’s opinion, Dean spent more time acting like a father to him than John ever did. Sam holds a deep resentment towards his father because he hated the transient lifestyle they led while growing up. And, Sam has no interest in following in John or Dean’s footsteps. He renounces his life as a Hunter and leaves the family against his dad’s wishes. Where Sam sees an absentee dad, Dean sees a hero. The family dynamic creates an endless source of animosity and conflict, but the Winchesters believe in family and truly love each other. When you’re a Winchester, risking your life to save your family is just the status quo. John Winchester isn’t winning any Father of the Year awards, but he taught his sons to be tough and self-reliant, and to never abandon each other. His parenting philosophy is: Do as I say, not as I do.

It’s no mystery where the Winchester brothers get their good looks. John Winchester is a very attractive man. He was more stable and a better catch before his wife was brutally murdered, but I wouldn’t turn him away if he wanted to share my bed for a few nights while passing through town. I’d be more than happy to help him relax after a long night of demon hunting. Hell, I’d even make him breakfast. And lunch. And dinner. Because I wouldn’t want to have to get dressed to leave the house. 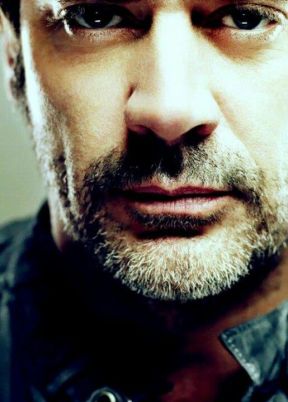 Just in case I didn’t make myself clear about why these three men are welcome to rest their shotguns against my nightstand, here is some further clarification.

Here’s Dean in the shower.

Um, what was I saying?

And Sam without a shirt.

It’s okay to stare. He wants you to objectify him.

It’s a huge responsibility being this handsome.