We’ve all heard the saying, “Laughter is the best medicine.” I say it’s an effective panty peeler, too. Who hasn’t enjoyed making or watching someone laugh? They seem more attractive in that moment of careless abandon, right? The people I have been most sexually attracted to in my life stimulate my brain first, and there is no better way to do that than to make me laugh. Especially about something inappropriate or irreverent. Laughter is sexy.

According to the article “Use Laughter to Improve Your Sex Life,” the area of women’s brains that is stimulated during sex is the same area affected by laughter. “The stages of laughter correlate to the stages of sex, especially in women. When you’re laughing, your facial muscles do their own thing, you simply can’t help it. Your skin becomes more sensitive too, just like when you’re in the throes of passion. That feeling of relaxation post-sex is also similar to the feelings when you stop laughing – your body temperature drops, you’re feeling relaxed and your breathing goes back to normal.” 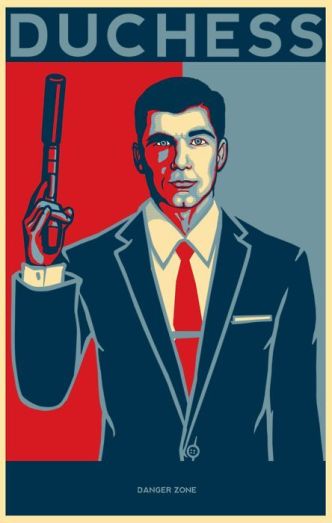 If you’ve never watched an episode of Archer, well…you’re in for a treat. Archer is an adult-themed cartoon on the FX network that spoofs spy movies and TV shows from the 1960’s – James Bond, The Man from U.N.C.L.E. (look for an upcoming post on Illya Kuryakin), The Saint, The Wild Wild West, I Spy, and The Prisoner – think Get Smart on crack with a healthy dose of sexually explicit banter. DO NOT watch this show with your children unless you want to attempt to explain why a mad scientist who may be one of the “Boys from Brazil” is romantically involved with a female Anime hologram.

Yeah, good luck explaining this to the kids.

But enough about Krieger, I’m here to talk about the main character, Sterling Archer, code name “Duchess.” Archer is the top spy for the global espionage agency, International Secret Intelligence Service (ISIS), which is run by his mother, Malory Archer. Archer and his boss/mother have an antagonistic and sometimes co-dependent relationship that borders on Oedipal.

Malory was a spy before Archer was born, and her work in espionage and lack of interest in being a mother meant that Archer spent most of his childhood living in a boarding school – for over fifteen years, “or, whatever, the normal number”, Archer explains. Needless to say, Archer has some serious mommy issues due to this maternal abandonment. And, he has no idea who his father is, because a) Malory slept around so much that she can’t remember, or b) is too embarrassed to admit who fathered Sterling. His emotional instability, narcissism, irreverence for all things sacred, and passive aggressive personality add up to some of the most hilarious and irreverent black comedy you can find on network television.

His unhealthy relationship with his mother has made it impossible for him to form stable relationships with other women. He sleeps around a lot. No, I mean A LOT. But, he feels genuine affection for his ex-girlfriend, Lana Kane. Both field agents, they team up on missions more often than not, which creates plenty of opportunities for conflict and sexually-charged arguments that usually jeopardize their ability to complete missions.

Lana is a much better spy than Archer, but he outranks her at ISIS because his mother is the boss. Archer and Lana have an on again/off again relationship, and end up in compromising situations on a regular basis. Even though she broke up with him sometime prior to the pilot episode, and they both have sexual relationships with other people, there’s usually quite a bit of sexual tension between them. Let’s face it, they make a good couple. At least when they’re getting naked. 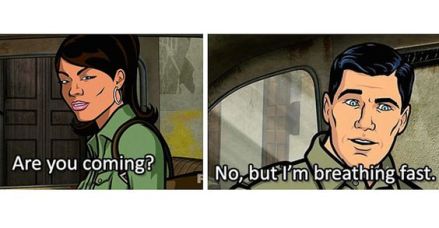 Lana and Archer are one of the hottest couples on TV even though they’re cartoons. Obviously, there’s a long history of erotic cartoons and art. Japanese Shunga, the work of R. Crumb, and Tom of Finland are just a few examples of how sexuality is expressed through art. So yeah, Sterling Archer is a totally fuckable toon. And so is Lana. I know Jessica Rabbit comes to mind for a lot of people when asked which cartoon character is the sexiest. But she isn’t nearly as sexy as Lana Kane. Seriously, if one more person mentions how hot Jessica Rabbit is, I’ll scream. You want a hot toon? Look no further.

At the beginning of the series, Lana is dating ISIS’s comptroller, Cyril Figgis, who is pretty much the exact opposite of Archer. Lana claims that she is dating Cyril because he is more sensitive and mature, but we soon come to realize she’s involved with him because she can dominate him and he is apparently well-endowed. Archer resents the fact that Lana has chosen Cyril over him, and constantly emasculates him. Preferably in front of Lana. Eventually, Lana leaves Cyril because she discovers that he’s been cheating on her and has developed a sex addiction. Archer finds this situation extremely funny, and decides to spend more time “bonding” with Cyril.

Laughing is great, but if I can laugh at something dirty and completely inappropriate, even better. Each character adds a new level of dysfunction and perversion to the mix. In the spirit of fiction writing, here is a character trait alignment chart of the Archer cast: 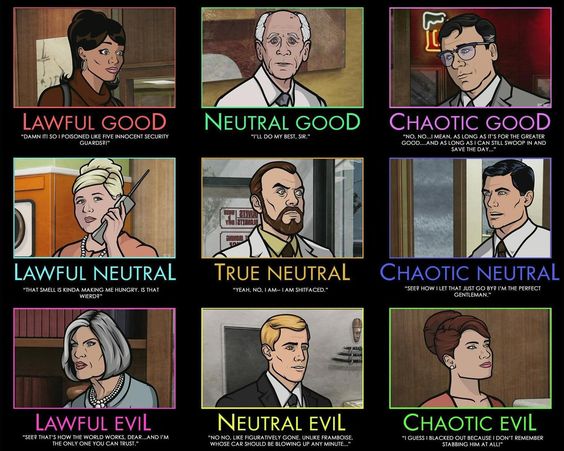 If you haven’t watched Archer and love to laugh at things that mortify and offend most people, you can catch seasons 1-5 on Netflix. Season 6 should be available soon, and the show has been confirmed for a seventh season. See for yourself why Sterling Archer (and Lana Kane) are totally fuckable characters. And even if you don’t find them attractive, you’ll still enjoy a good laugh. 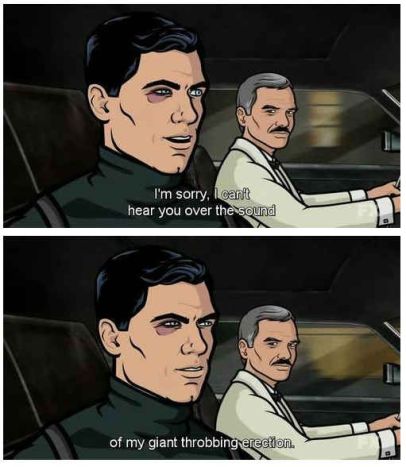 No, you aren’t hallucinating. That really is Burt Reynolds, one of Archer’s all-time favorite idols and man crushes.

So pour yourself a stiff one, kick back, and enjoy. 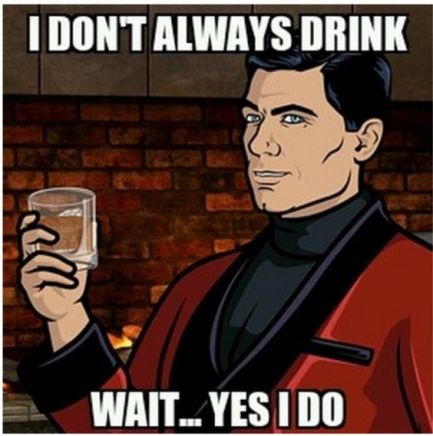