Back in November of 2012 my life was forever changed as I binge-watched the first season of American Horror Story on Netflix. I had begun my MFA in Writing Popular Fiction at Seton Hill University earlier that year in June, and as my second residency was rapidly approaching, I had assignments and manuscript deadlines looming over me, I was working a soul-sucking job at the University of Pittsburgh, and juggling parenthood. Let’s just say I was burdened by adult life and needed an escape. Netflix rarely disappoints in that department, and I can usually count on finding a film or series that will transport me into the realm of escapism. 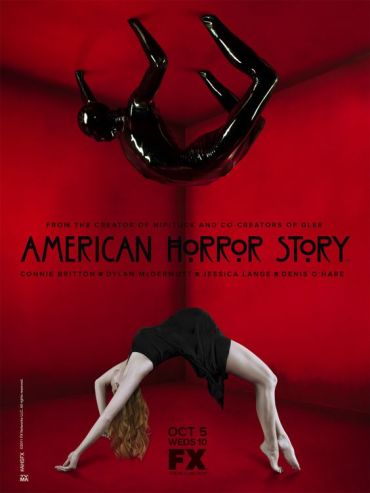 It was a Friday night. Everyone was asleep. I was up late reading, writing, doing laundry and making a grocery list. It felt good to be writing again, but also a little overwhelming when I considered all of the other responsibility I had. I turned on Netflix and saw that American Horror Story: Murder House was available. A few friends who had watched it in real time insisted that I watch it as soon as humanly possible. They said it was right up my alley. They were not wrong.

I sat alone in my living room with only the glow of TV for light, wrapped myself up in a blanket, cracked open a beer, and settled in. As I watched the first episode and was slowly introduced to the characters, including the house, I got excited about the fact that a TV show was focusing on a haunted house and showing the history of why it was haunted and how it affected the people living in it over time. Brilliant. What I didn’t expect was how gloriously violent and gratuitously sexual the show was. I was given glimpses of some of the most private and intimate moments of a person’s life, including their deaths. I was instantly hooked. I stayed up past 3:00 a.m. and managed to watch four episodes before I had to crash.

They next day I woke up with a physical urge to watch more. The show was like a horror movie on crack that only adults are allowed to watch. This show had captured the concept of spectacle in all its glory. I spent several hours watching more of the show on Saturday and Sunday. And I’ve been a fan ever since. 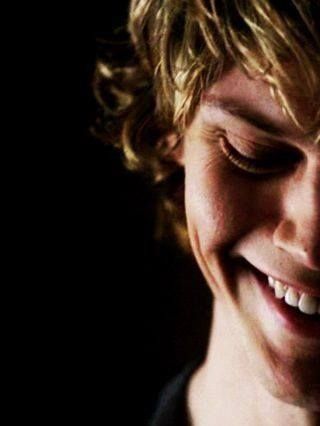 If you’ve never watched the first season of American Horror Story, shame on you. And, you probably shouldn’t read any further, because this post is riddled with SPOILER ALERTS.

Tate Langdon is a 17-year-old boy with a history of mental illness that his abusive alcoholic mother, Constance, is in denial about. She brushes off his violent outbursts and rage by saying that he’s overly sensitive. One day, in 1994, he showed up at his high school armed to the teeth, and single-handedly killed 15 people. In one respect his mother is right. He is a sensitive boy. He is extremely protective of the people he loves. If he thinks they’re going to be harmed, he resorts to violence. But that doesn’t exactly explain his choice to commit mass murder at his high school. Tate is misunderstood by most people, confused about his own thoughts and feelings, and homicidal.

Every day is Halloween.

The police track Tate to his house after the shooting, and a SWAT team kills him in his bedroom. But death doesn’t get Tate down. He simply continues to exist as a ghost in the house. Unlike some ghosts we’ve encountered in fiction, or perhaps real life, Tate is a tangible ghost. He appears to be alive and is able to interact with the living as if he never died.

In death, Tate is no less violent. In fact, his emotional imbalances are heightened by the other ghosts haunting the house who encourage him to commit unspeakable acts. The house has a long history of violence at the hands of several deeply disturbed individuals. The house is essentially a receptacle for sin. The evil that saturates the house from attic to basement demands to be fed more souls. The house uses Tate to get what it wants, but he struggles against his darkness. Tate may feel guilt for doing the terrible things he does, but he sure is good at being a homicidal maniac.

This is why we can’t have nice things.

When a psychiatrist and his family move in, the house awakens and the ghosts come out to play. Tate becomes one of the doctor’s regular patients as he masquerades as a neighbor boy with depression. After one of his sessions, he meets the psychiatrist’s teenaged daughter, Violet Harmon. Tate catches Violet attempting to slit her wrist over a bathroom sink. Helpful boy that he is, he explains that she’s doing it wrong. If she really wants to kill herself, she needs to cut vertically, not horizontally, because “they can’t stitch it up.”

Tate and Violet bond over their teen angst and morbid interests. And it doesn’t take long for them to become more than friends. Can you blame her? Look at that boy. He’s dark, brooding, dangerous, and absolutely fucking adorable.

Cutest psycho on the block.

They spend a lot of time together, but have to keep the nature of their relationship a secret from her dad. The boy develops an unhealthy obsession with her that manifests as love in his mind. Violet’s dad knows that Tate is disturbed, and doesn’t want him near his daughter. And he especially doesn’t want Tate having sex with her. Against her dad’s wishes, Violet continues to see Tate. They meet secretly in the basement or he appears in her room at night.

A match made in Hell.

Violet is a positive influence on Tate. He can be sweet and charming when given the chance. It’s hard not to feel sorry for him at times, because he seems to genuinely love Violet even if he is a psychopath.

Violet is having a hard time fitting in at her new school and is going through a period of depression, which is why she’s been cutting herself. One particular girl is bullying Violet and upsetting her so badly that she starts missing school. Tate wants to help, so he tells Violet to kill the girl. Violet invites the girl over and Tate not only scares the bully, but Violet too. Violet is so disturbed by the weird and terrifying shit she sees in the basement that she tells Tate she doesn’t want to see him anymore.

Creepy is the new sexy.

He’s crushed, but his rage manifests when she rejects him. He yells at her, “I thought you weren’t afraid of anything!” They spend some time apart. Violet continues to struggle with depression, and Tate has some projects to work on around the house.

They can’t stay away from each other, and their relationship begins to deepen. Tate tells Violet more about himself – not everything – but he begins opening up to her. They still meet in the basement, but Tate takes Violet on a real date and she has such a good time that she decides she’d like to have sex with him.

99 problems and the size of his penis isn’t one.

As their physical relationship blossoms, so does their emotional attachment. Tate is already unstable. It probably isn’t a good idea to have a sexual relationship with someone as fucked up as he is, no matter how big his dick is. Okay, maybe just once. Or twice. But the consequences could be pretty bad. Especially if you find out that your crazy ass boyfriend murdered 15 people, got shot, and died, but is still taking you on dates.

Just in case you were looking for a word to describe your feelings about Tate.

The closer Violet gets to Tate, the more she learns about who he really is. When she discovers that he not only killed a bunch of people, but is in fact dead, she takes it pretty badly and commits suicide.

Nothing says love like dragging her unconscious body down a hallway while trying to save her from a drug overdose.

Despite Tate’s efforts, Violet dies. But, she doesn’t know that she’s dead. And neither does her family. Tate knows the truth but doesn’t tell her right away. Instead, he tells her that he loves her, asks her to kill herself, and be with him forever. When she refuses he tells her the truth.

Things a serial killer would say.

Now that Violet’s dead, they make a great couple, right? Well, once Violet dies and has insight into what’s happening in the house, she learns about Tate’s violence, and is absolutely revolted and heartbroken when she finds out he raped her mother. And, is the father of her new baby brother. 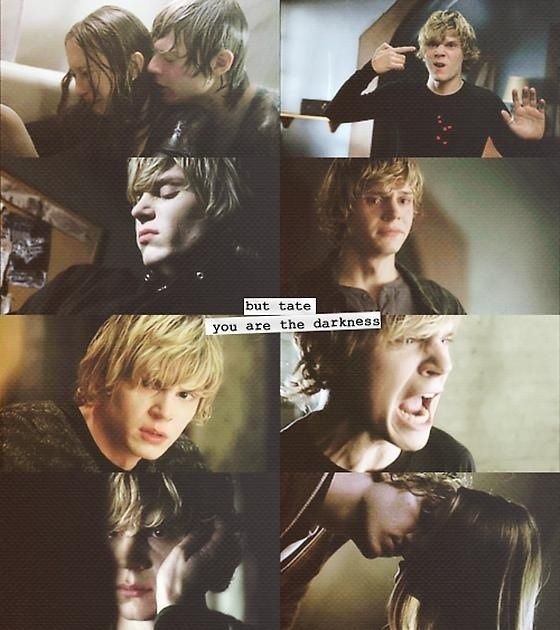 I fell in love with a dead boy.

Seriously. Fucked up stuff like that happens all the time on the show. Why aren’t you watching it right now?