In 1986 I was 14 years old. I was dating a boy who was obsessed with David Bowie. I loved Bowie’s music and I must admit that I found him rather attractive in an androgynous and theatrical way. I always thought of him as a fictional character, which in many ways I think was his goal. When you continually reinvent yourself and write songs that talk about space and magic and love that consumes you like a fire, you’re bound to attract a following with an interest in speculative fiction. So, this boy and I were both into Bowie for similar reasons and when we discovered that he would be playing a villain in Jim Henson’s film about magic and unrequited love, Labyrinth, we were thrilled shitless.

I saw the film 3 times in the theater. Once with the boy, and two more times by myself. I have no idea how many times I watched it once it became available on cable, but let’s just say that I watched it enough times to freak out my 9-year-old by reciting almost all of the lines by heart when I showed it to him around the holidays.

If you’ve never seen this film, um…where the hell have you been? If it’s been a long time since you’ve watched it, schedule a family movie night right now. This flick has something for everyone and appeals to people of all ages. I mean what’s not to love? David Bowie AND Muppets. You can’t lose.

IMDb’s synopsis of Labyrinth is short and to the point: “A selfish 16-year old girl is given 13 hours to solve a labyrinth and rescue her baby brother when her wish for him to be taken away is granted by the Goblin King.” Okay, I realize that is what most people see as the plot of this story. Especially children who are showing up for Muppets. But there’s much more going on in this film.

Now imagine him traveling through space in a blue police box.

Jareth, the Goblin King does steal Sarah’s (she’s the selfish 16-year-old) baby brother in order to turn him into a goblin. We can only guess that this is where all of the goblins who live in his castle in Goblin City came from, which if you think about it, makes him a kind of dad to these creatures. And a kidnapper. I did say he was a villain. But aside from stealing babies and tormenting teen girls with palpable sexual tension, he really isn’t a bad guy. Actually, he’s just lonely and kind of weird. 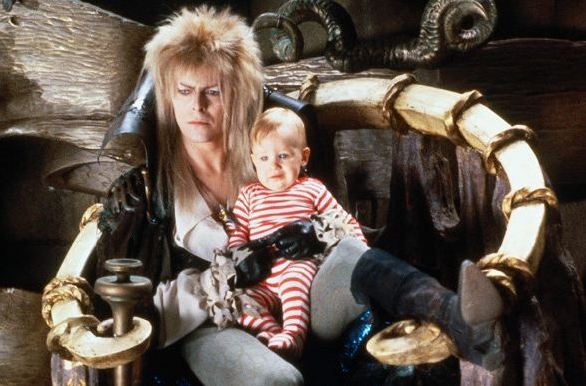 Is there room on that lap for me?

Sarah is a spoiled little bitch who hates to babysit her infant brother. All outward appearances tell us she comes from a nice home, has access to a good education, is obsessed with fairy tales, well one book in particular, and like most teen girls, she thinks her problems are bigger than anyone else’s. We also get the feeling that there’s no special fella in her life. She’s really into this fantasy world she’s created for herself, and even though she’s 16, she doesn’t appear to be thinking about boys much. Well, that is until she meet’s Jareth.

When a wizard dressed like this flirts with you in your bedroom, you ask him to spend the night.

She recognizes him almost immediately and is a bit star-struck, but comes back to her senses when she realizes that this stunningly gorgeous wizard-looking dude has stolen the baby she’s supposed to be looking after.

She accepts his challenge to complete his labyrinth and save her brother, but what she doesn’t hear is the subtext. The entire time she’s trying to complete this task, he will attempt to distract her and possibly woo her into staying in Goblin City with him. I mean he has all those goblin children, now all he needs is a bride. A teen bride who is at least half his age if he were mortal, but who the hell knows how old Jareth really is. For me, this is when the story got really interesting, because I learned something about my 14-year-old self. I learned that older men who want to establish romantic relationships with teen girls aren’t just a bit scary, but super hot. What can I say? I like perverts.

Honestly, most of his distractions seem like foreplay and confessions of devotion. Using one of his magical crystal balls (yes, he has magical balls) and a poisoned piece of fruit (he isn’t above using roofies) he transports Sarah to a dream world where he holds a masquerade ball. I’m sorry, but if Jareth held a masquerade ball in my honor, the only reason I’d be thinking about the labyrinth would be to figure out where we could screw.

Speaking of magical balls, his crotch is practically a character in the film. Go ahead, Google David Bowie + Labyrinth + crotch. You’ll be busy for at least 30 minutes. Seriously, David Bowie’s crotch in Labyrinth has its own pop culture following.

See, I wasn’t making that shit up.

I’m sorry. What was I saying? Oh yeah. Jareth, the Goblin King is Hellbent on getting Sarah to forget about her baby brother and become his queen instead. You know, for someone who seems pretty smart and reads a lot, she doesn’t seem to be catching the drift of what Jareth is proposing. And if she is, but has no interest in returning his affection, then she’s just plain stupid.

But here’s the thing. He makes it pretty clear that he wants her. And he tries to be patient waiting for her to catch up, but all she does is run away and complain about her predicament.

She doesn’t seem to appreciate all the trouble he’s gone to in order to create this adventure through the labyrinth that he’s hoping will lead to his bed. Or dungeon.

All she wants to do is bitch about how unfair her life is and the fact that he isn’t playing fair. Hello! Villain! 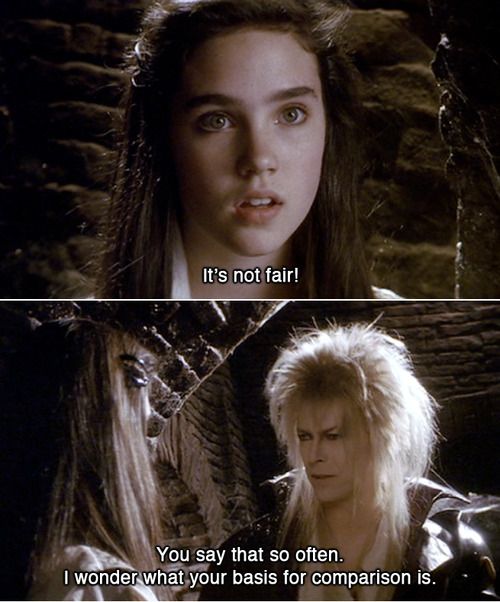 Seriously, Sarah. Open your eyes. He isn’t asking for much.

OMFG, where do I find this man?!

Yes, some of his methods are a bit deceptive and he’s quite a bit older than her. But, he does try to warn her not to follow him at the beginning of the tale.

Sorry. Couldn’t hear you over the sound of my ovaries exploding.

What teen-aged girl in her right mind who is waking up to the reality of her sexual nature would walk away from this man?

He’s a king. With a castle. Who knows magic. And wants to bonk your brains out. So what if he lives at the center of a labyrinth that seems vaguely similar to where the Cenobites hang out? I’m sure Jareth has some pretty amazing sights to show you, too.

Eventually, he gets fed up with her saying no.

He’s a reasonable Goblin King. He wants a child bride to shower with affection as long as she does what she’s told. And, if she’s naughty, he might give her a spanking. We can only hope. But despite his efforts, she chooses rescuing her brother and returning to her normal boring-ass life. I can remember sitting in the theater and thinking that she was out of her mind.

But what the hell I did I know? I’ll tell you what I knew then and know now. Magic like he’s offering only comes along once in a lifetime if ever. So, I’ll say it again. If a wizard shows up in your bedroom and flirts with you, invite him to stay for the night. Go on, have a little happily ever after.

Good fairy tales are about inappropriate sex with strangers.

One thought on “Fuckable Fictional Characters: The Goblin King”