Sometimes the stories we feel closest to and enjoy the most are the ones that create a feeling of pastiche in our hearts and minds. A cluster of false memories in which we long for an imagined past that reminds us of who we wished we’d become. Who we wished we had known, friends and lovers that well-developed fictional characters make us crave. Through them we revisit our own feelings — real or imagined — of the highs and lows in life. And, if those characters happen to have supernatural abilities they can inspire feelings of longing we can’t even explain. Alongside the lust, love, pity, fear, and loss we feel for them, there’s this added dimension of wishing we could become invisible, immortal, turn back time, or simply read other people’s thoughts. Any of us who have had the experience of being an outsider can relate to the overwhelming desire to be accepted, even if it’s by a group of misfits like you.

I’ve been dying to talk about the BBC television show, Misfits, which is currently streaming on Hulu. My desire to talk about the show is two-fold: First, the show itself is a wonderful SFF dark comedy about young adults facing unexpected complications in an already complicated time of their lives. And second, I’m going to discuss a very fuckable fictional character, Simon Bellamy (stay tuned, post coming tomorrow).

If you haven’t watched the show, I highly recommend it, because it has a lot going for it. It’s darkly funny and chock full of dick jokes, and oddly enough commentary on the spectrum of sexuality and gender politics. It’s necessarily violent, and people die. Violently. It has a wonderfully diverse cast of young actors you will grow to love. At the heart of this SFF show about young adults gaining superpowers from a freak storm, there’s a love story. Several love stories. And most importantly, an interracial love story.

The show opens with a group of young people showing up for their first day of community service. They don’t know each other, and at first glance, you can tell that they all lead very different lives. Obviously, none of them want to be there, but each of them has committed some offense and now must work off their sentences by picking up trash, scrubbing graffiti off the walls of the community center that acts as their home base, painting benches, and participating in other community events like dances for the elderly, and art therapy for the mentally ill, while wearing orange jumpsuits.

We begin to get a picture of their personalities as they complain about being forced to do community service, show disrespect for their parole worker and each other. Curtis, an athletic dark-skinned guy complains about having to work with the other people, saying over and over that he shouldn’t even be there. He thinks he’s better than the rest of them. Kelly is a Class-A Chav with an attitude and a taste for violence. Initially, she doesn’t seem especially smart, but turns out to be an excellent problem solver and survivor. And, aside from Simon, she ended up being my favorite character.

Alisha is a pretty light-skinned black girl who uses her good looks to manipulate people and get what she wants. However, she was unable to talk her way out of a drink driving stop when she fails the breathalyzer. She is desperate for attention and uses sexuality in place of personality until people start treating her with kindness and respect. Nathan is a hysterically funny and morally corrupt prick who ends up making us feel a lot of sympathy and pity. He’s a wanker with a heart of gold. And then there’s Simon. A painfully shy, comic book reading nerdy boy with his shirts buttoned all the way up to the neck. He’s cute and delightfully creepy in his social awkwardness that borders of psychopathic behavior. Initially, we don’t know why any of them is there, but slowly, their stories unfold.

On their first day, a freak storm comes out of nowhere, dropping hailstones the size of soccer balls that are heavy enough to cave in a car roof and break through pavement. Their probation worker, Tony, yells for them to take cover and they run toward the community center for shelter. Before he can unlock the door, each of them is hit by lightning and knocked silly. At least, five of the young people and Tony are hit. Another young offender misses the storm, because he’s hiding out in the men’s room smoking a joint. He stomped off after getting paint on his cap, and never came back to finish his assigned task.

Kelly is the first to notice that she’s developed a power. A few weird things happened the night before, but now she’s certain something is different. She can overhear what people are thinking. And, like Sookie Stackhouse, she realizes that people are twisted and disgusting, and you really don’t want to know what most of them are thinking. Especially their thoughts about you.

The next day they show up at the community center and the kid with the cap isn’t there. Their all a bit too self-absorbed and freaked out by the storm to even really notice that he’s missing. While getting ready for the day, Simon discovers his ability in the locker room. Ironically, the one that everyone tends to ignore is able to turn invisible. No one notices him disappear and we get our first peek at the anger and frustration bubbling beneath Simon’s quiet surface.

Tony gives them their assignment for the day. No one notices that Simon is missing, but he eventually becomes visible again and joins the others outside. While cleaning graffiti off a wall, Kelly asks if anyone else is experiencing anything weird since the storm. Nathan makes fun of her, but Simon speaks up and says that he was able to turn invisible. No one believes him either.

At some point, someone thinks the wrong thing about Kelly and she storms off, overwhelmed by her feelings and her fears about this new ability. Whiles she’s off having a smoke and a good cry, we soon realize that the parole worker has also been affected by the storm. He developed an uncontrollable need for violence that looks a lot more like the Rage Virus in 28 Days Later rather than the Hulk wanting to smash. Running for her life, Kelly seeks the safety of the community center and tries to warn the others. She’s terrified and locks the door behind her, but none of them believe her. Nathan is a smart ass know-it-all, and opens the door just as Tony approaches and he kills Kelly by hitting her over the head with a sharp-edged piece of metal. 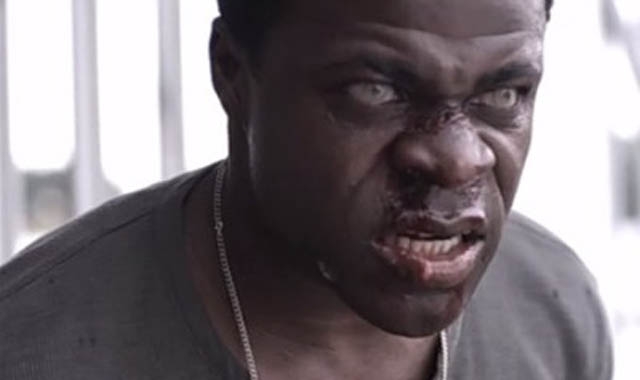 That’s when Curtis discovers his power. The emotional overload of seeing Kelly murdered triggers his power, and he is able to turn back time and warn them about Tony. He still gets in the building, but Kelly has enough time to hit him over the head with a paint bucket. Repeatedly. Tony’s murder was admittedly self-defense, but Kelly knows that no one will believe them based on their records. In the process of figuring out what to do, they find the kid with the cap stuffed into one of the lockers. Now they have two dead bodies to deal with, and while everyone is freaking out, Simon calmly says, “No body, no crime.”

Bound together by a freak supernatural event and murder, they hide the bodies and prepare for whatever happens next. Amazingly enough, they deal with the unusual circumstances pretty well, and even manage to laugh at themselves and each other. Of course, we soon discover that their problems are only just beginning. Alisha’s power is more of a curse than an ability, and we don’t discover Nathan’s until we’re well into the first season.

After burying Tony, their new probation worker, Sally, arrives and suspects them of killing her co-worker and fiance. It is through this character’s interactions with Simon that we begin to see the darker sides of him, but also develop an emotional connection with him that makes him one of the most interesting characters. Despite his creepy good looks and spooky intelligence, he has the best character arc in the series. He goes through a personality transformation that made me want to pay closer attention to the beautiful Welsh actor who plays Simon Bellamy, Iwan Rheon. Apparently, I need to start watching Game of Thrones again.

As the series progresses, we get to see how these supernatural abilities change each character and the society around them. The characters experience a variety of outcomes at the extreme end of the consequences spectrum based on the choices they make out of selfishness, for the sake of love, or the belief that they’re helping others. The show is a lot of fun to watch, but the it also gives you some tasty food for thought. I dare you to watch only one episode. I bet you can’t.

One thought on “Save Me, Barry!: A Review of Misfits”