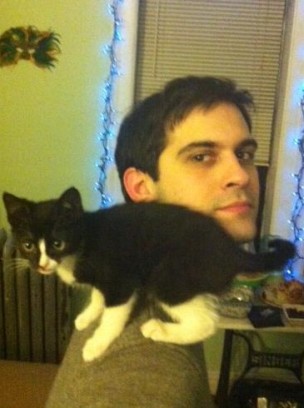 Last week, David Day visited Girl Meets Monster and talked about genre as a means of choosing what to read as opposed to what to write. This week, I’m joined by David X. Wiggin. David and I have never met face to face, but we belong to Facebook group of weirdos who enjoy dark humor and laughing at our own shortcomings. I’m thrilled to have David as my guest today.

David X. Wiggin barely escaped Brooklyn with his life, though he still occupies New York City. You can find his most recent fiction on Pseudopod and in Black Treacle Magazine.

GMM: Tell me about this “mechanical manbody”. It’s sounds intriguing and creepy. What is it and where did you come up with the idea?

DXD: So, to answer the question a little bit of background first: the idea for this story came from a photo-collage I once saw that depicted a furious dog in a military uniform (it was in an issue of the Paris Review iirc.) That image really stuck with me (as well as some dog-men that appeared in a hallucination scene in an early episode of the TV show “Millennium”) and I wanted to write a story about this furious dog-man (this is usually how a story starts for me, by the way: a particular image or song or mood germinates in me like a seed until it starts to grow branches.) As I worked on the story other ideas started sprouting about this world of anthropomorphic animals and out of that came ideas for two more races: one that was a species of humanoids that managed to be beautiful in unconventional ways (the “Ill-Mades”) and the other was birds (the “Avians.”) I’ve always been fascinated by birds in general and in trying to dream up visualizations of humanoid birds I hit on the idea of them being normal, but highly intelligent and articulate, birds that walked around using cleverly contrived puppet bodies that gave them hands, legs, etc. Think like giant robots with pilots, but clockwork and, well, human sized.

Anyway, there was something kind of decadent about that idea and birds are almost always floating above the rest of the world so I thought it made sense to make them the rulers of this world. It’s also a nice metaphor for how they’re manipulating everyone else and making others do all the work for them

GMM: Based on the strangeness of the characters, my assumption is that your story is either set somewhere in outer space on another planet. But, I don’t know what the time period is in relation to our own past. present, or future. When is this story set? Do you prefer writing about invented times and places, or do you also write about alternative Earths?

DXD: It’s another dimension, more specifically, like Narnia or any number of fantasy worlds. I was messing around with an idea that it’s a world specifically hidden within our language, but unfortunately that idea was both too complicated and pretentious for me to pull off in the end… part of the reason this remains a fragment. As for when it’s set… well one character’s name is a pretty clumsy distortion of a historical figure from our world so I’ll leave it at that.

I’m a huge fantasy nerd so I love world building, but I’m not necessarily married to stories set in made up worlds. I published an alternative earth story a while back called “The Apollo Mission” about the ancient Romans developing space travel, but I haven’t done much with alternative earths otherwise. Maybe worth considering though!

GMM: There’s clearly a political or caste structure in your story. Is it primarily between species, or is it a bit more complicated than that? The dog-like creature is a decorated military man, so I assume that there is a hierarchy within that system, and I assume that there have been wars. Do you draw any parallels between what’s happening in this SFF story and what’s currently happening in our own time on Earth?

DXD: The hierarchy is pretty basic: the Avians have tricked the rest of the world through the power of their eloquence into letting them run it. The Bestials –which the dog-like creature belongs to, and all more or less look like humanoid versions of earth animals- are the “middle class” of the world (which is called Lexis.) They do all the dirty work for the Avians. Finally, at the bottom of society are the “Ill-Mades” who are unclassifiable but come in any sort of shape and size. The Ill-Mades are the serfs and the slaves and are considered to be no more than beasts. None of this hierarchy is legitimate or based on reality, mind you. It’s all a great big trick the Avians have pulled, pitting races against each other and making them think they’re inferior. Thilter, the dog-creature, is the only one to see through this big lie and, being a power-hungry megalomaniac uses this knowledge to lead a revolt of Ill-Mades against the Avians. Which, as we can see from the opening paragraph of the story, has obviously failed.

Does this story have any parallels with what’s currently happening on our own Earth? Well, I started this story a long time ago (maybe 10 years?) so obviously it’s not based on anything specific happening right now, but yeah I’d say there are a lot of echoes with a lot of hierarchy-heavy societies throughout history — where some people are given greater power and influence than others for basically arbitrary reasons. Some people live in mansions and eat caviar for breakfast because they can move numbers on a screen around while others starve and suffer because they can’t. Or even worse some people are better off than the color of their skin. That seems no crazier to me than a world where birds are in charge because they’re birds! So yeah, obviously this story reflects a lot of my feelings about the world, but it’s not in reference to anything specific. “The world is just awful, usually for stupid reasons” is about the gist of it — whether it be our world or a world run by birds and beasts.

He wanted her to kill him.

Galatea understood what he was asking –demanding-, though they’d bound his muzzle shut with thin bands of steel fused together in a flawless web of metal.  That hadn’t stopped him from trying to reason with, beg from, and curse her every one of the countless miles they had traversed.  He struggled, but despite his seven feet of height and the hundreds of jangling medals on his chest that proclaimed his martial prowess, with his arms and legs manacled and chained he was no match for her.  His furred face was a froth of frozen snot, spit, blood, and mud and his yellow eyes burned with a heat that had in the past had typically preceded the death of thousands.  He frightened her, broken and bound as he was, as he had always frightened her.  Still, she would not surrender to his will as she had in the past.  For his crimes, he didn’t deserve death.  He deserved far worse.  They both did.

On the icy slopes of Mount Tattaghata, twenty thousand feet above the earth, whipped and nipped by the spirits of cold and wind, the two figures struggled against the elements and against each other.  One was a Bestial –a giant dog-man dressed in the rags of what had once been a beautifully tailored military uniform and fifty pounds of thick chain- the other an Ill-Formed-Woman.  Though most of them were hidden beneath her heavy coat, thousands of arms of every size grew from her back and her neck like the tendrils of an anemone.  Under her spider-fur hat, a head of thin hair-arms squirmed.  Had there been anyone to see them in this desolate corner of Lexis they would have been flabbergasted by the sight of a low caste Ill-Formed treating a decorated Bestial general like a prisoner.  No doubt it would have looked like a sick joke.  And there was no question, Galatea reflected, that was precisely what it was intended to be.  Prince Owlbert was known for his cruel ironies.

It had been her first time to see the inside of the Court (she’d been in the Castle of the Moon where the Avians held their winter sessions, but that had been after Thiltre’s Phoenix Brigade had purified it with flames) and after years of black jungles and scorched earth, the jade fountains, gilded floors, and occidental perfumes drifting through the air were almost unbearable.  Though Thiltre had had to be forced to his knees, Galatea had prostrated herself with an instinctual ease that terrified her.

They had conditioned her well.  She had experienced for herself the cruelty with which the Avians had repressed other races, stripping away their freedoms of mind and body to make pliant servants.  They had built their empire upon the bloodied backs of her people.  She knew all about their petty natures and pathetic hypocrisies.  She had seen first-hand just how mortal they were.  And yet… she had entered the court shaking, not from fear of the punishment that awaited her, but of being in the presence of her masters.  They had taken so many things from her.  Things she had never had to begin with.

Prince Owlbert had leaned down from his perch atop the neck of his mechanical manbody and studied them with blinking black eyes.  Followed by the faint whistle of spinning gears and winding strings the manbody raised a jeweled hand in an elegant gesture of greeting.

“Salutations.  Be welcome to the Court of the Sun, General Thiltre,” the prince murmured sleepily.  He spoke so quietly everyone in the hall had to lean in to hear.  “It is a glory to be presented with such a stimulating novelty in our paradigmatically dull chamber.  It has been unrelenting eons since we have had a suitable divertissement.  Is that not unequivocal?”  He looked to his courtiers: cardinals, parrots, ravens, peacocks, chickens, and blue jays; a brilliant mosaic of colored heads bobbing eagerly.  Then he turned back to the prisoners.

“You have given us sufficient of provocation over the past few turnings of the sun, General,” he mused.  “Karxxango, Dell-Where, and Tompiq conquered in a fortnight.  Approaching half a million Bestials and Ill-Mades aggregated from every corner of Lexis to stand beneath your tangerine banners.  You collected victory after victory over our Silver Legions.  Those squadrons of child soldiers- Nursery Killers, I think they were called-, were they of your own inspiration?  Delightful.  Your resolution to depart the court to lead this rebellion was a veritable disappointment. You could have ascended higher than your father.  He hung himself from shame when he heard that it was you leading the rebellion you know.”

Thitlre had snickered from behind his muzzle.  His cunning yellow eyes scanned the court.  Even then he had still considered himself undefeated, imagining that his devoted followers would come rescue him, and was taking catalogue of what precious things here he would claim for himself and who he would keep alive to torture on dull afternoons.  To his credit, he had returned from worse defeats.  This time, however, he had not counted on the extent of his second-in-command’s betrayal.

Next week, writer and climbing enthusiast, Ryan DeMoss, joins Girl Meets Monster. Do you have a story you’re dying to share with the world (or at least the few people who read my blog)? Send it my way at chellane@gmail.com.