Last week, Elsa M. Carruthers stopped by Girl Meets Monster, and this week, Kristin Dearborn shares her thoughts on why she prefers horror fiction to reality. 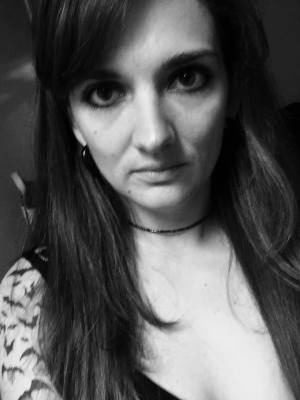 If it screams, squelches, or bleeds, Kristin Dearborn has probably written about it. She revels in comments like “But you look so normal…how do you come up with that stuff?” A life-long New Englander, she aspires to the footsteps of the local masters, Messrs. King and Lovecraft. When not writing or rotting her brain with cheesy horror flicks (preferably creature features!) she can be found scaling rock cliffs, zipping around Vermont on a motorcycle, or gallivanting around the globe. Learn more at www.kristindearborn.com!

GMM: For some reason, while I read your fragment, the old adage, “write what you know” came to mind. Hopefully, no one ever pointed a gun in your face, but this feels like it was inspired by a real-life event. How much of your fragment is based on something that happened to you, or someone you know? How often do you draw from your own experiences as a writer?

KD: Thankfully I’ve never had a gun pointed at me, but I have been on an airboat ride in Florida! I’ve also worked a lot of retail in my day. I used to be the assistant manager of a Gamestop (I know, I know, NERD ALERT) and some of my coworkers were robbed once. Whenever I was counting the drawer at the end of the night I imagined the worst. Bethany’s case takes it a step further. The man with the gun isn’t just there for the money—that would be easy. You tell yourself if you do what they ask, you’ll be fine. This guy wants more than that, he wants to get into the swamp in the dark.

GMM: Is it easier to find your voice and convey your thoughts and emotions by writing horror? If so, why? Aside from Lovecraft and King, what drew you to this genre and why do you continue writing in it?

KD: Horror had me in its talons from the moment I read James Howe’s Bunnicula. I didn’t see a lot of horror movies as a kid, but I read a lot of books: Crichton, Koontz, King, John Saul, Dan Simmons. Horror stories make more sense than reality: when something awful happens, characters band together and fight it. Usually they win…that the outcome is not guaranteed only makes it sweeter when good triumphs. Horror is a fun way to process the awfulness in the real world, to escape from the 24-hour news cycle, most of which is a horror show on its own. Great horror is never about the monsters, it’s always about people and relationships—authors and filmmakers who struggle with that and paint the walls with gratuitous gore aren’t going to stand the test of time. I think it’s a testament to King’s staying power: he writes memorable characters that we come to care about.

GMM: You mention in your bio that people don’t think you look like a horror writer. What do horror writers look like? Do you think it’s because you look “normal”, or is it because you, like your character, have breasts?

KD: I think the average human expects a horror writer to be a bald guy with a beard and a black skull t-shirt. Now, I know, love, and respect more than a handful of super talented bald, bearded, black skull wearing horror authors, but there’s so much more to us than that! When I show up for work I wear a blazer and high heels, nice long sleeves covering up all my artwork. If I’m feeling wild and crazy I’ll show off one small velociraptor tattoo on my ankle. My eyebrow piercing has been gone for over a decade (RIP eyebrow ring, 2000-2007) and I don’t color my hair at all, let alone fun colors never found in nature. Subverting expectations is part of the horror genre, and I want to do my part.

Bethany looked up from counting her drawer when she heard the crunch of tires on gravel. A black sedan, windows tinted. It tucked itself in next to one of the rental cars the tourists brought. She watched, waited. As she gave up and resumed re-counting for the third time, the door opened, and a man stepped out.

Something in her gut twisted. Spidey senses tingled. Nothing terribly offensive about his appearance at first glance. Black slacks, cheap black dress shoes. Tan jacket. He wore his dark hair slicked back, and a pair of expensive sunglasses perched on his head. His skin, like most residents here, was deeply tanned, and wrinkles creased his face though he didn’t look much older than forty something. He carried a messenger bag over one shoulder.

If you didn’t go to college in Florida (heck, if you didn’t finish high school) and sometimes if you did, you basically doomed yourself to a life in the service industry. Bethany liked people, especially liked the kind of people who came here, a little ways off the beaten path and wanted to see real Florida.

This guy set off alarm bells in Bethany’s head. The way he carried himself, the bulge in his jacket even though the sun hadn’t gone down yet and the air was still warm. Lots of people carried guns, but something about him…

“Help you, sir?” she tried to sound cheerful.

He gobbled her up with his gaze, lingering on her breasts before meeting her eyes. She wanted to puke. On him. Instead she gripped the edge of her table as hard as she could. They’d talked about putting a gun in here, Cap thought it was ridiculous they didn’t have one. “A girl’s got to defend herself.” Jack believed in trusting people.

“I need to get on your last airboat. Gators after dark?”

“I’m so sorry, you’re about twenty minutes too late.”

She couldn’t even hear the buzz of Rebel Yell’s fans anymore. The Eastern sky had taken on a deep purplish hue, and soon Cap and his charges would be starting to look for alligators.

“I’ll pay for a private tour.”

Bethany pasted a smile across her face. She injected a faux brightness into her voice. “Sorry sir! Thursday is the next night we run the Gators After Dark tour. It’s supposed to be a full moon and clear that night. It’s going to be a great tour—”

Do you have a fragment collecting dust that you’d like to share? Drop me a line at chellane@gmail.com. See you next week!