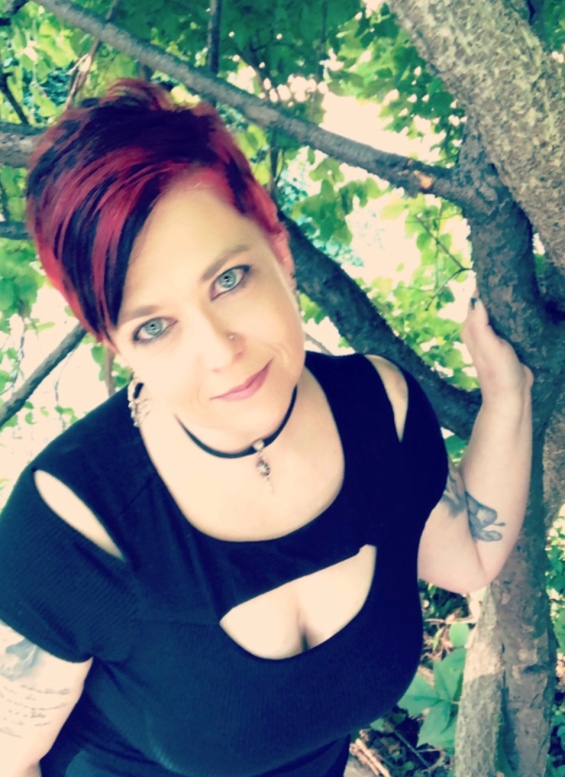 EV Knight writes horror and dark fiction. Her debut novel, The Fourth Whore, will be published in 2020 by Raw Dog Screaming Press. EV’s short stories can be found in The Toilet Zone Anthology by Hellbound Books and Siren’s Call magazine and the anthology Monstrous Feminine from Scary Dairy Press. She is also cohost of the podcast Brain Squalls with Knight and Daigh. She enjoys all things macabre; whether they be film, TV, podcast, novel, short story, or poetry. She lives in the cold northern woods of Michigan’s Upper Peninsula with her family and two hairless cats.

GMM: Congratulations on The Fourth Whore. Without giving away too many spoilers, can you tell us about your debut novel? And, maybe share some of what your experienced in the process of getting your first novel published. Do you have any advice for other writers?

EVK: The Fourth Whore is what I like to refer to as feminist horror. My protagonist is Kenzi, a street hardened survivor and my antagonist is Lilith, first wife of Adam/demoness come back for revenge. Lilith is furious with men: God, Sariel (the angel of death who trapped her in a talisman), Demons of Hell who tortured her for many years, and humans whose myths characterized her as a demonic child-killing whore. All she ever wanted was equality with her husband. When Kenzi accidentally releases Lilith from the talisman, Lilith plans an apocalypse neither the world nor Heaven could even imagine. Rather than gathering the four horsemen of the apocalypse, she gathers her four “whores”—women who have suffered similar abuses/biases as she. She leaves a trail of blood and horrors in her wake while assembling her wrecking crew. Kenzi must decide to join Lilith as her fourth and final whore or try to save a world that never cared about her pain.

I think every writer’s publishing process is unique to their experiences. I knew when I started writing the novel that my dream publisher was Raw Dog Screaming Press. I became a member of the Horror Writer’s Association and attended StokerCon. I met so many amazing people and many representatives of small presses. I was so impressed with the personal touch and the down to earth approach they took with their authors; I knew I wanted to be a part of the Raw Dog family. When I sent my manuscript to them, I wasn’t sure they (or anyone for that matter) would accept it. It has some hardcore gore, a political bent, some liberties were taken in rewriting some biblical stories, and as I said, this novel is strongly feminist (but I need to stress, it is not man-hating). Basically, as a debut novel, it comes out swinging. But they took a chance on me and agreed to publish.

As for advice for writers, get out there in your genre community. Get to know writers, publishers, agents, etc. Go to Cons and offer to buy someone a drink in exchange for a friendly chat. Writer’s, I have found, are some of the most caring and nurturing people. They want to help you succeed and they will introduce you to their friends. When people get to know your name and/or face, it may just move you up in the slush pile. And sometimes, you even get an invitation to send your manuscript just from having a drink together and telling them about your work.

GMM: I haven’t had a chance to listen to your podcast, Brain Squalls with Knight and Daigh. When did you begin working on the podcast? How would you describe the content? What is your favorite episode? Where can we listen?

EVK: Brain Squalls was born from a game my husband and I play on road trips all the time. We both enjoy making up stories and often times, stories start with the most mundane observation or prompt. I got my start writing by working my way through Mike Arnzen’s book Instigation: Creative Prompts on the Dark Side.

Matt and I had been throwing ideas around about a podcast since we met. On our way home from last year’s StokerCon (where we attended a couple panels on podcasting), the idea came to us.

At the beginning of each episode, we use a prompt to get us started on a story and throughout the next hour, we literally work out a story from start to finish. We flesh out characters, we discuss plot and backstories. We discuss what we as the writer would know and what we would let our reader know. It’s a “live” walkthrough of creation in process and we ask listeners to send us comments on how they might have told the story differently. Its been a lot of fun. And completed our first season with a special Christmas episode. Our very first episode titled “Warm Vanilla Sugar” and our last Christmas episode are my favorites but I was really happy with all our stories. Next season, which begins in January, we’ll be bringing on guests to tell stories with us. We’re inviting writers and other creatives to come play. It’s going to be a lot of fun. Maybe you’ll join us, Michelle?

GMM:  I loved your fragment. It gave me the creeps. Telling a horror story from the POV of a cat is interesting. And, I’m dying to see what that tentacle belongs to. Have you written other stories from the POV of animals? How does it differ from writing from the POV of people? Or monsters for that matter?

EVK: I have in fact. I wrote one very near and dear to my heart which I haven’t sent out for publication yet because I am waiting for the perfect submission request. It’s from the POV of a research chimpanzee. I have several more written from the POV of a cat or a group of cats. I think, for me, an animal is the ultimate reliable narrator. We as humans put personalities to animals and certainly, they are individuals, but a lot of what they do is instinctual. Their feelings are tied to that. For instance, Milo is a pet but he is an outdoor cat. He loves his family and he knows they love him but he can’t help that he feels called to be outside. He is not bad, just feels that call of nature and it gets him in trouble. I love trying to think in that free way. No ulterior motivations, no blocked emotions, you know? It’s fun to write and just allow a character to be and to feel in the moment.

Humans can’t be trusted in that way. We all have secrets, we all have motivations that affect our behavior. A monster by typical definition is usually a creature with harmful or malicious intent. Even the scariest of animals, aren’t evil, they may be predators but its all instinct, primitive brain and I love digging deep into mine.

*Excerpt from a short piece titled Milo about an indoor/outdoor cat who likes to bring his people spoils from his outdoor adventures. Only this adventure may just be his last.

The best way to deal with this usurper of his dinner was to tear it apart. He bit into one of the snake husks and pulled. He felt a tear and pulled harder. Thick, aloe-like ooze squeezed out of the bite marks and dripped down Milo’s chin. This ooze was black and it smelled like decay. He wrinkled his nose but he refused to let go of the thing. He pulled, and the whole creature rolled itself around him.  The tiny worms bit at his chest and belly. Its beak was snapping feverishly, so close to Milo’s nose that he could smell the chipmunk’s blood. The piece of tentacle in his mouth loosened. There was no choice but to swallow it quickly and grab another purchase of the slimy thing. This time, he unleashed the wildness inside him and tore at the thing with his front claws, all the while pulling back with his head. It came loose. The beak let out a high-pitched squawk. The thing, which was definitely not a fungus, somersaulted completely over, lifted itself up on the husks it had left, and limped away, leaving a stinking, steaming trail of thick, black muck behind it.

Milo, satisfied with his heroic revenge, dragged the spoils of war back to his home. It seeped and dripped the black sap onto the ground and Milo’s tongue. It had a sort of numbing sensation that Milo did not like much. He wanted to get rid of the thing. He was going to give it to his people, and he might even spend the night in the house. All of a sudden, he didn’t feel like being an outside cat anymore. At the front door, he dropped his find on the stoop and scratched and yowled until they answered.

“My God, Milo, what have you brought this time?” the female said. He pushed it toward her. She crinkled her nose. “Ugh. Sick! Bad Kitty! Where did you find a tentacle out in the woods?”

Milo meowed. He wanted her to pick it up and examine it. This was not your common gift, plus it had made him feel quite sick. He rubbed his face against the bristly mat in front of the door.

“Oh, you stinky cat! That thing is positively disgusting. I didn’t know Octopus had black blood.” She leaned down and poked it with a finger. “Or maybe that’s ink. Ooh, and I didn’t know they stunk so much. Milo, that is just gross.” She kicked it. It squished under her shoe and puffs of yellow stuff came out of the little bumps all over it. Milo sniffed at it again. It didn’t smell so gamey anymore. Now it just smelled sickeningly sweet. He followed her into the house.

“If you’re coming in here, you’re getting a bath,” his person said.

Maybe you have a fiction fragment hiding in a drawer that you’d like to dust off and share. If so, send it my way at chellane@gmail.com. See you next week!