Last weekend I had an interesting conversation with one of my really good friends (don’t worry, Stephanie, those posts we talked about are coming, so stay tuned). We talked about a personality quirk (disorder?) that we share in common. The desire and attraction we feel toward all things that dwell in darkness. No one should have to make apologies for what they find attractive or erotic. We all fall somewhere on the spectrum of sexuality and desire, Honey. I’ll try not to judge you if you don’t judge me, unless you’re hurting people (physically, mentally, or emotionally) without their consent.

Darkness promises mystery, adventure, and fear, an unburdening of the perception that we must always remain on the straight and narrow, and yes, even pain. As counter-intuitive as it sounds, some folks just aren’t happy unless they’re unhappy. I know I’m not alone in this troubling and confusing state of being. I don’t like the fact that I continually seek out inappropriate relationships. At least I don’t climb into cars with strangers anymore. I’m trying to break myself of these self-defeating and potentially life-threatening habits. It’s a work in progress.

I like monsters. A lot. But I don’t want to date them in real life. That still won’t stop me from getting all hot and bothered for them. Vampires? Love ‘em. Werewolves? I’d hit that. Fallen angels? Do you have a few hours to talk over coffee or Bourbon? I’ll admit that my taste in fictional characters might be a little unsettling to some people, but once again, I’m not going to apologize for what turns me on. 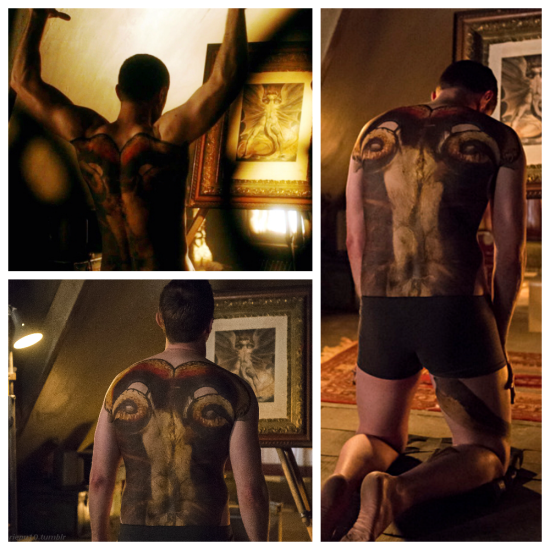 Francis Dolarhyde is a glorious monster. When you talk about Thomas Harris’s work—his novels, the films and TV show they have spawned—most people automatically think of Hannibal Lecter. Actually, most days I find it hard NOT to think about Hannibal Lecter. In the novel Red Dragon, Harris masterfully created a character who, in my opinion, is just as scary as Dr. Lecter. Without a doubt, the monster at the end of this book is the Red Dragon, Francis’ alter ego and the driving force behind his well planned, cleverly executed serial murders. 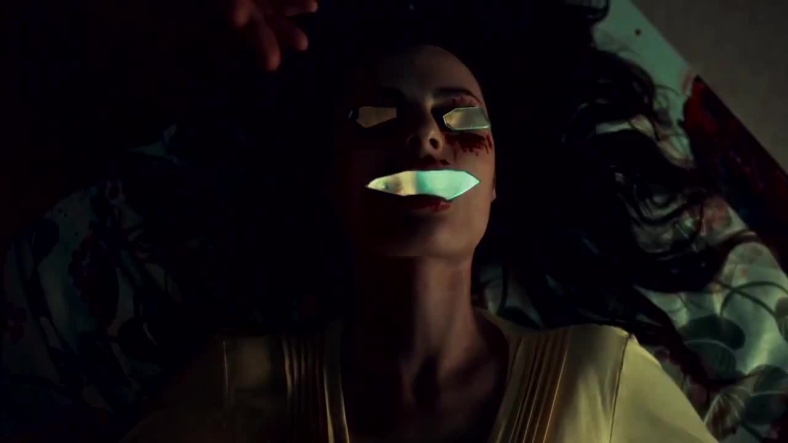 At first glance, I didn’t like him very much. Every slight, every dirty look, every unkind word gets tallied up by Francis, as if he’s some maladjusted, compulsive, vengeful bean counter and the rest of humanity are the beans. I hated when he spit on the woman in the convertible simply because his gaze made her uncomfortable, self-conscious. I hoped he wouldn’t end up being just another emotionally crippled misogynistic jerk.

Do you want WWIII? Because this is how we get WWIII.

Thankfully, as the story unfolded and I learned about Dolarhyde’s unbelievably traumatic childhood I became more interested. And, with every new horrible discovery about his past, I grew to love him more and more. I mean, come on, this serial killer has it all. He is physically deformed at birth, abused and abandoned by his mother and grandmother, sexually repressed, and a voice inside his head tells him to kill families that remind him of the family his mother formed without him. The family he was allowed to visit, but never welcomed to join. He is an outsider that many readers can relate to, and if not empathize with, at least feel some sympathy toward.

Dolarhyde’s childhood was wonderfully atrocious, and Harris’s descriptions of his life in Grandma’s house reminded me of several dark Victorian classics. Dolarhyde’s two personalities made me think of Robert Louis Stevenson’s The Strange Case of Dr. Jekyll and Mr. Hyde, especially toward the end of the novel when Francis tries to stop the Dragon and form a relationship with his love interest, Reba. His two sides struggle for dominance as Francis tries to protect the woman he believes he loves. At other times I thought of Mary Shelley’s Frankenstein, with his physical deformities and inability to join “polite” society. Francis is filled with rage and envious of the “normal” people around him. He kills them to ease his pain and take revenge on the people who abused him. The Dragon is essentially the end result of Grandma’s psychological experiments on Francis that further transformed his already damaged psyche.

And then, we have Grandma’s dentures. Quite possibly one of the most disturbing images I have encountered in a novel, the dentures almost have a life of their own, which ramps up the body horror aspects of this tale. Grandma’s choppers allow us to venture down several literary paths. We could go Big Bad Wolf here, “oh Grandma, what big teeth you have.” Or we could take the Gothic Horror path since Dolarhyde makes a pretty convincing Dracula with false teeth filed into sharp points. He literally bites his female victims to death.

As I said, Francis Dolarhyde has a lot going for him as a character designed to make us check under the seats before turning the key in the ignition and double deadbolt the doors at night. Thomas Harris created an amazing killing machine that commits unspeakable acts and yet somehow convinced me to cheer for him when he fights against his murderous urges. I hoped he would escape capture at the hands of the FBI and Will Graham.

This is my design.

There are elements of romance in the novel. Apparently Thomas Harris believes that even serial killers deserve love. Or maybe he’s suggesting that if they received love in the first place they may not have chosen to murder people. Harris elicits even more sympathy for Francis when he meets a woman who is attracted to him. He reciprocates and they begin dating.

This is how a grown man reacts to being shown love for the first time.

They are the perfect fairy tale couple, a blind princess (literally, not just too dumb or unwilling to see the truth) and her prince who is magically transformed into a dragon by an evil wicked witch. Bryan Fuller made all of my dreams come true with the intense  emotional and physical connection between Francis and Reba in season 3 of Hannibal. Their sex scenes were gloriously erotic. I must have rewatched the sex scene at least six times after I watched episode 10. So effing hot. Seriously, when he grabs her, picks her up, and carries her to his bedroom, I was like SPLOOSH!

I hoped Reba’s affection would be strong enough to rescue and redeem him in the end. His own delusions and lack of impulse control ultimately lead to his demise. Rather than trusting that Reba cares for him, he listens to the Dragon. His immaturity, lack of experience with live women, and delusions prevent him from achieving a normal and healthy life with Reba. Like most of us, our faults and bad habits tend to undo our efforts to improve ourselves no matter how hard we try to overcome them.

You should probably let someone get to know you a little better before you show them your dark side.

I don’t just like this monster. I am sexually attracted to him and find him totally fuckable. He’s fuckable in the novel and as portrayed by Ralph Finnes (Red Dragon, 2002) and Richard Armitage (Hannibal, 2015) (especially Richard Armitage), but the thoughts I have about him make me a bit uneasy. Why? As I said, I love monsters. I have no problem with the idea of liking Dracula or the Big Bad Wolf. Maybe my feelings of unease come from the fact that I know those monsters are fictional, make-believe, fairy tales, but serial killers are very real. While I’m fascinated by their crimes and their motivations to commit them, I do not idolize real serial killers. I want the police to catch them and punish them to the full extent of the law. Serial killers cause me to waffle about my stance on the death penalty. 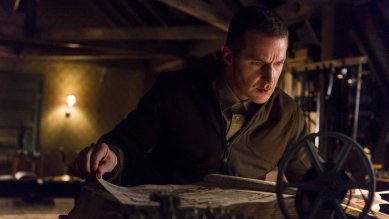 Francis Dolarhyde is a fictional character, but Harris breathed so much life into him that he seemed disturbingly real. Serial killers are real. Dracula is not. Monsters that are created to represent the darker aspects of the human psyche or to examine and comment upon questionable societal norms are safe. The aging Goth teen queen inside me craves stories about monsters who prevail despite their physical deformities and emotional immaturity. Weird and horrifying is acceptable as long as it has a message or a purpose. But here is the Red Dragon standing before me, engrossed in his own gloriously terrifying acts of violence against women and their families, and somehow I find beauty there. My adoration of this character gives me pause. 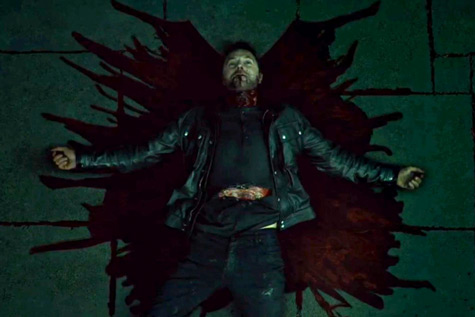 Even his death is beautiful.

Typically, I would use the excuse of Hollywood’s knack for putting attractive actors in horrifying roles. The Devil is tempting not only because he encourages you to do the sinful things you crave, but also because he shows up as the thing you want most, and probably wearing a nice suit. Even before Bryan Fuller provided us with a visual buffet of horrific beauty on Hannibal, I desired Francis Dolarhyde.

Sometimes you can’t ignore the voices. 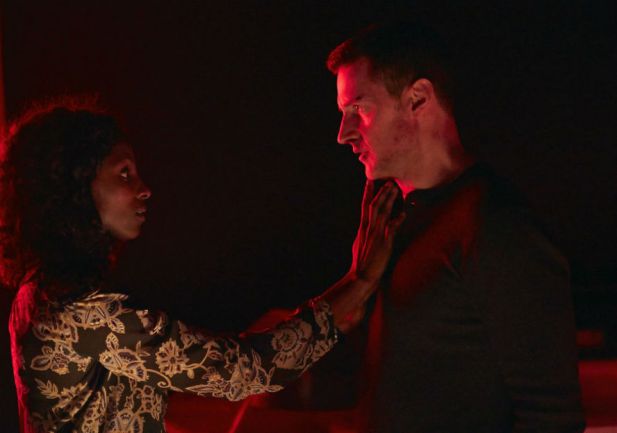 They make a beautiful couple.