Family photo taken in the early 1990’s with my friend and classmate, “Vampire Liz.”

Just over a year ago, something happened to me that made me question my identity. In fact, since the election results came in and I woke up in Trump’s America on November 9, 2016, I’ve been thinking about identity a lot — mine, my son’s, my friends’, my neighbors’, my co-workers’, and complete strangers’. I’m not 100% sure what made me think about the incident that caused me to question the very nature of my own “blackness,” but it might be any number of news stories you can read at your leisure online dealing with the shocking reality that blatant racism is back in style.

At any rate, whatever resurrected this experience for me, I started thinking about it a bit more deeply. During a meeting I attended about a year ago to discuss the qualifications of candidates applying for a social equity position at a state university, a topic related to current events came up. Bill O’Reilly had said some stupid, unprofessional, racist bullshit about Congresswoman Maxine Waters’ appearance.

I could launch into a tirade about that alone, but that’s not what I’m here to talk about. Not today. What struck me about the topic of discussion, was the fact that the white woman who was upset about O’Reilly’s statements (even after his apology, he wouldn’t shut up and continued harassing Congresswoman Waters), managed, in the same breath, to commit her own act of unconscious racism.

The same woman who was talking about how upset she was because Congresswoman Waters had been attacked/criticized/mocked/marginalized for being “culturally authentic.” And then, she looked at me and said, “That’s the right term, isn’t it?” She committed an act of unconscious racial microaggression.

Now, to be fair, we were a group of faculty and staff working together at a university and engaged in friendly conversation about something we all took issue with, but then suddenly I was assigned the role of Black Person Expert. This wasn’t the first time, and I assure you, it won’t be the last time I get asked to put on that hat.

When I was younger, I operated under the misconception that if I was one of the only people of color in the room, it was my responsibility to speak for All Black Folks. I assumed it was my responsibility because it was an expectation of white people. Each time I was asked to speak for All Black Folks, it made me uncomfortable to be put on the spot by a room full of white people who were expecting me to educate or enlighten them on the mysteries of “blackness.” It made me uncomfortable for several reasons, including the fact that I worried I would say the wrong thing. The “wrong thing” was a double-edged sword, because I was either going to misrepresent black people by giving my opinion as an individual who had very little access to other black people growing up, or I was going to disappoint white people by not saying what they wanted to hear. These situations became even more uncomfortable when other people of color were in the room, but weren’t being asked for their input. By the time I was done speaking, I was almost 100% guaranteed to have enemies on either side of that one-sided conversation.

Why would I be chosen as the spokesperson for All Black Folks when other people of color were present? Well, because I’m not really black. I mean, unless it’s more convenient for me to be black.

When the white woman looked at me for confirmation that she was using the appropriate, politically correct terminology for…I don’t know…black people in their natural state of being, a few buried memories and neglected emotions came to the surface of my mind. But first, I laughed out loud at the absurdity of her question and the fact that she was using the term incorrectly.

Before I delve into what this one seemingly harmless question awakened for me, I just want to make something perfectly clear, just in case you didn’t know, THERE IS NO MONOLITHIC BLACK IDENTITY.

You can’t point to one person’s experience and say, “that’s culturally authentic.” Also, “cultural authenticity” is a literary term used to measure how well a book depicts a specific cultural group regarding language, everyday life, etc. So, I’m not sure you can even use the term to describe real people. And, even if you could, the woman’s use of the term in relation to Bill O’Reilly’s comments and the reality of Congresswoman Waters’ hairstyle doesn’t make a lot of sense. What distinguishes Waters’ hair as being culturally authentic?

To satisfy my curiosity and to make sure I wasn’t spouting bullshit like Bill O’Reilly, I Googled the term, and the only hit I got that referenced actual people was in relation to tourism and the practice of “performing” cultural authenticity. I think this is also called staged authenticity, in which an indigenous culture creates a version of their culture for tourists that may not match the actual lives of people living in that culture.

Even after confirming my suspicions about the term and its correct usage, it still struck a chord with me, and I felt the need to explore how I was feeling about it being used to refer to non-fictional people. People who don’t necessarily fit into the misconception of “blackness” being one identity. So, I Googled “what does it mean to be black in America.” Go ahead. Google it. I’ll wait.

A lot of people are talking (and have been talking) about the meaning of “blackness” and how we view ourselves and others. Now, this is a subject I could really sink my teeth into. I realized that reading about other people’s experiences would help me unpack my own feelings and reactions to that white woman’s question and expectation that I had the answer.

FYI, I don’t have the answer.

After searching for “what does it mean to be black in America,” I felt validated, comforted, empowered, and relieved to know that I wasn’t alone in dealing with this identity issue as a woman of color who doesn’t always fit people’s world view of “blackness.” I especially enjoyed reading a Washington Post article that looked at the experiences of three women and what it means to be “black enough.”

“According to Jelani Cobb, a historian and writer at the New Yorker, defining “blackness” is inherently complicated — because race is an invented category dating back to slavery, and the category can encompass a range of identities and cultures. People identify as black, African American, African, Muslim, Native American, biracial and sometimes more.”

Identity can be a slippery slope when you don’t fit into one checkbox. And, as most people who aren’t completely clueless realize, the shaping of your identity is more complex than simply belonging to one racial group of people. This is especially true if you don’t belong to ONE racial group of people, but rather two or more. And, don’t even get me started about the intersectionalities of class, gender, sexuality, political views, religious beliefs and economic status that make the complexities of race and ethnicity even more complex.

Just like there is no monolithic blackness, there is no monolithic whiteness (although, the implication/belief of its existence is the foundation of so many problems we’re all facing in the world today), no monolithic femaleness or maleness, no monolithic gayness or straightness, or any monolithic version of any identity. That’s right angry fascist Americans, like it or not, we really are all a bunch of snowflakes. But, that’s a good thing. Our differences make us stronger and more interesting at dinner parties.

My entire life has been about finding a place to fit in. Wondering how I will ever be enough — black enough, feminine enough, pretty enough, smart enough, financially stable enough — which really boils down to being loved for who I am and who I am not.

Who am I?  I am a college educated middle-aged woman of color who writes dark speculative fiction. I am a divorced single parent of a tween boy who can pass for white in the right setting. I am the daughter of a white woman and a black man. I was raised in rural Pennsylvania by my mother’s working-class white family who were not actively racist, but culturally bigoted. 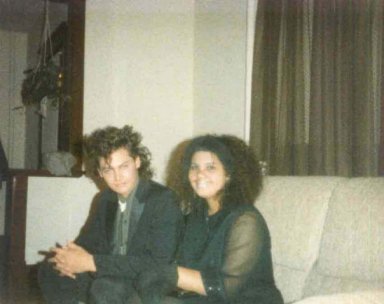 As a teen I experimented with drugs and attended hardcore shows in Central PA with skinheads, skaters and punks. I identified with Goth culture, dressed all in black, and read every piece of vampire fiction I could get my hands on. Hell, I even met Glenn Danzig.

Me and my BFF.

My best friend is a white man I have been friends with for over 30 years and we have family dinners and celebrate certain holidays together each year. We’re family. And, speaking of family, I’m really fortunate to be so close to my cousins who make me laugh and remember not to take myself too seriously.

So, if you’re hoping to put me into one monolithic category, good luck. The color of my skin does not determine the unique and diverse nature of my life experiences. And, it certainly doesn’t make me an expert on “blackness.”